To share your memory on the wall of Brent Shifflett, sign in using one of the following options:

His favorite activities were traveling with his siblings and enjoying time at the pool with his grandchildren. Brent was also an avid sports fan, and had a love hate relationship with both the Washington Redskins and the Baltimore Orioles. He loved watching sports on TV, but his favorite thing to watch was anything his grandchildren were playing.

Brent is preceded in death by his parents, Earl and Josephine Shifflett, and sister Connie. Left to cherish his memory are his daughter Erica and husband Doug DeForge of Mathews; sister Wanda German and husband Jerry of Gloucester; brother Michael Shifflett and wife Roberta of Gloucester; grandson Tyler Kirkpatrick and wife Lesley of Greenville, TX; granddaughters Lillian and Josephine; great-granddaughter Lila; and a numerous cousins, nieces, and nephews.

A memorial service has been postponed until a later date. Arrangements by Faulkner Funeral Homes, Bristow-Faulkner Chapel, VA.
Read Less

Receive notifications about information and event scheduling for Brent

We encourage you to share your most beloved memories of Brent here, so that the family and other loved ones can always see it. You can upload cherished photographs, or share your favorite stories, and can even comment on those shared by others.

Posted Mar 18, 2020 at 09:43am
I was saddened to hear of Brent’s passing. He was a great classmate at Gloucester High School and shared mornings in homeroom with him for a long time. A heartfelt smile and a good laugh was always on hand. I know his absence will be difficult but with time, I know your happy memories of him will comfort you. You are in our thoughts in prayers.

Posted Mar 16, 2020 at 02:23pm
All my memories of Brent are happy ones. Between pick up basketball games and hanging out in the good old days, there was always something going on. Good jokes were some of our highest priorities. I remember his working with Tom Dunlap in those busy times when they both worked together at Safeway. Being an outdoorsman was something we always in common. There was always a smile and chuckle every time we got together. His family was the apple of his eye. Lost track for a few years until we moved our business to Kilmarnock in 2006. He'd stick his head in the door once in a while and we reconnected.
Pure spirit of heart is how I will remember my old friend. Rest In Peace, Brent.
Keep that basketball pumped up. A pickup game in heaven sounds great to me!
Comment Share
Share via:
DD

Posted Mar 14, 2020 at 03:19pm
My deepest sympathies to Brent's family, I've known him for many years,cand he has always be a very kind and considerate person..More recently he was living and working at a residence that I cleaned, we always looked forward to Brent being there to let us in the home..He always had a smile on his face and a great attitude...He will be truly missed...I know he will truly remain in the hearts of his family...Donna Dunaway..
Comment Share
Share via:
PW

Brent and I went to high school together and graduated class of 1973. Brent was a great man and had many wonderful friends. I am praying for the family. God bless. Pastor Bill West 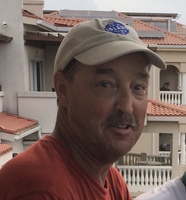