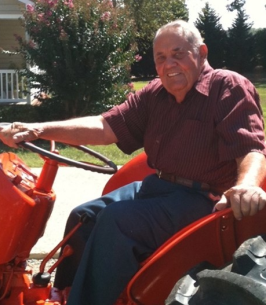 Following the tragic loss of Chuck’s brother John D. Leasure, the family traveled extensively before settling in Jones Mill, PA. Sometime later the family moved to Warner, VA, where Chuck met the love of his life, Gertie. After the family home was lost to a fire, Chuck built the family a new home where Chuck and Gertie lived most of their married life.

Chuck was a devout Christian, a family man, loving husband and adoring father. He had a passion for hunting, repairing and selling used cars, restoring old tractors and playing the guitar. He was also a very talented craftsman. Chuck worked as a mechanic, marine electrician and welder at the Remlik Boatyard for Allen Waddell. After the Remlik Boatyard was sold to Mr. Caskie, Chuck was elevated to Marina Manager. Chuck also worked at Southside Marine Service for 16 years. Chuck was later employed by Leasure’s Wrecker Service and Leasure’s Auto Parts Inc. He also worked as a courier for Atlantic Express before his well-deserved retirement. Chuck was also long-time member of Forest Chapel United Methodist Church of Saluda, VA.

Family and friends are invited to attend a graveside memorial service for Chuck on Sunday, October 2, 2022 at 1:00 PM at the Forest Chapel United Methodist Church Cemetery located at 316 Forest Chapel Rd, Saluda, VA 23149. In lieu of flowers or gifts, Chuck requested that memorial donations would be made to Gloucester-Mathews Humane Society, PO Box 385, Gloucester, VA 23061. (Website: https://www.gmhumanesociety.org/; Phone: 804-693-5520.)
The family is very thankful to the nursing staff at the Walter Reed Convalescent Home for their compassionate care.

Psalm 23:6, “Surely goodness and mercy shall follow me all the days of my life: and I will dwell in the house of the LORD for ever.”