To share your memory on the wall of Ernest Cashwell, sign in using one of the following options:

Ernie served in the US Air Force for four years where he was an instructor in radio electronics. Left the Air Force as an S/SGT. He graduated from NC State University in 1956. Worked for AMF in Raleigh, NC for four years then Philip Morris in Richmond, VA for 28 years as Chief Electrical Engineer where he received several patents. Ernie would not want us to mourn his death but to celebrate his life.

In keeping with Ernie’s wishes there will be no funeral services. We ask in lieu of flowers please make a memorial donation to Children’s Hospital Foundation, PO Box 26384, Richmond, VA 23286-8196 or your favorite charity.
Read Less

Receive notifications about information and event scheduling for Ernest

We encourage you to share your most beloved memories of Ernest here, so that the family and other loved ones can always see it. You can upload cherished photographs, or share your favorite stories, and can even comment on those shared by others.

Posted Jun 24, 2020 at 08:08am
Judy, Rob and Mike,
I'm so saddened by Ernie's passing, and hope that your grief will be lightened by the thoughts and prayers of family and friends. It was 50 years ago this month that I came to intern for Ernie, beginning a friendship that lasted well into both our retirements. I shared his obituary with our Facebook friends at Philip Morris, and I have been overwhelmed by the outpouring of comments and memories of Ernie. I wish that I could share them with you.
Steve Church
Comment Share
Share via: 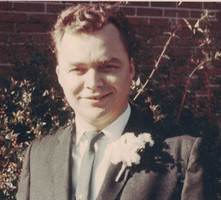