To share your memory on the wall of Jack Schappell, sign in using one of the following options:

After the war Jack completed his apprenticeship as a brick mason and began a long career that commenced in Pennsylvania and eventually concluded in the Hampton Roads area. He was a master brick mason and managed numerous job sites for Chesapeake and United Masonry, including many NASA buildings at Langley Air Force Base and at the College of William & Mary.
He was very proud of the beautiful buildings he built over his career.

Jack was an avid bridge player, participating in many tournaments across the area during his life, until events were discontinued due to the Covid-19 pandemic. He was very proud of his family and close
to his grandchildren. Jack’s first job on the peninsula was construction of Noland Methodist Church at Huntington Ave and 55th street in Newport News. His eldest grandson, many years later, is the resident of the beautiful home directly across the street from that very Church.

An outgoing person with many friends on the Middle Peninsula, Jack loved his breakfast buddies at Lee’s Restaurant in Kilmarnock, VA, he always enjoyed his talks with his grandsons, and he never turned down a cool Wendy’s Frosty. Jack lived a full life, had many joys, experienced some bad times during the war, but had a full and happy life. He was a man of strong faith who looked forward to being reunited with his loved ones, past friends and his Heavenly Father upon being called home. RIP Jack.

A private Memorial Service and Interment will be held at Marine Corps Base Quantico at a later date. In lieu of flowers, donations can be made to the American Heart Association, 300 5th Avenue, Suite 6 Waltham, MA 02451 or the charity of your choice. Faulkner Funeral Homes, Bristow-Faulkner Chapel is assisting the family with arrangements.
Read Less

Receive notifications about information and event scheduling for Jack

We encourage you to share your most beloved memories of Jack here, so that the family and other loved ones can always see it. You can upload cherished photographs, or share your favorite stories, and can even comment on those shared by others.

Plant a Tree in Memory of Jack
Plant a tree 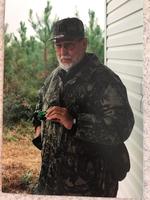