To share your memory on the wall of James Williams, sign in using one of the following options:

Provide comfort for the family of James Williams with a meaningful gesture of sympathy.

Jimmie was a World War II veteran who proudly served in the Navy in Panama. Upon returning home he continued to serve others by becoming a member of the Middlesex Volunteer Fire Dept. where he is an honorary member. He was manager of the Rappanna Theatre in Urbanna which was a major fund raiser for the fire dept. He was a charter member of the former Central Middlesex Volunteer Rescue Squad which is now Middlesex County Volunteer Rescue Squad. An active member of Urbanna Baptist Church where he has served as deacon, treasurer, Sunday school teacher, and Sunday school superintendent. He was treasurer of Mid-Tidewater Baptist Association, 1997-2009. He was a member of Urbanna Lodge #83 for 66 years, serving as secretary for over 30 years; also a member of Urbanna Chapter Royal Arch Masons. He served Urbanna Town Council as Mayor July 1972-June 1980, Council member January 1984-June 1984, Mayor July 1984-June 1990. Jimmie was Oyster Festival Grand Marshall 2001. Jimmie and June were Grand Marshalls Urbanna Hometown Christmas Parade 2014. He loved being on the water, whether fishing or boat riding on Smith Mountain Lake. He also loved to work and had a successful career in the wholesale food business.

A celebration of life will be on Saturday, October 12 at 3 pm in Urbanna Baptist Church with visitation at 2 pm. Interment will be at Hermitage Baptist Church, Church View.

Flowers were purchased and a memorial tree planted for the family of James Williams. Send Flowers

Flowers were purchased for the family of James Williams. Send Flowers

Posted Oct 08, 2019 at 09:03pm
Mrs. Williams I am so sorry to hear about Mr. Williams. I cherish the years that I knew him and your family. May the memories of days past bring comfort in the days to come. In Christian Love, Leslie Coggsdale
Comment Share
Share via: 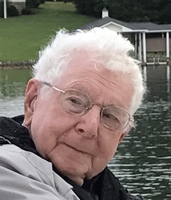