To share your memory on the wall of James Lehner, sign in using one of the following options:

He met his future wife, Suzanne, in Oxon Hill, Maryland. They were married for fifty-three years and have two daughters, Kimberly Robinson (Charles) and Frances Lehner. Jim is also survived by a sister, Shirley Host (Ray) and brothers, Arthur J. Lehner and Thomas S. Lehner, he was also blessed with five grandchildren and three great grandchildren. He is also survived by his canine daughter, Lola, who lifted him through difficult times and was always by his side.

Jim retired from Clayton Modular Homes where he enjoyed a successful career. He was in the top tier sales four times which gifted him and his wife with rewards to Alaska, Puerto Rico, Las Vegas and Disneyland. Jim was a talented mechanic who enjoyed collecting and restoring vintage cars and boats. His favorite hobby was boating with their bicycles bungeed to the bow of “Susannah”, when Jim and Suzanne motored the Chesapeake Bay on numerous occasions traveling as far north as Baltimore Harbor and south to Virginia Beach including ports in between.

Jim had a lovely smile that revealed his mood without speaking a word. He will be sorely missed but the family will take comfort by knowing Jim lives in the house of the Lord. Special consideration to Riverside Walter Reed Hospice for their attention to Jim and his wife including J.C. and Brenda Nunnally who have a special connection to the Lord that comforted him.

A celebration of Jim’s life is planned for a later date. Arrangements by Faulkner Funeral Homes, Bristow-Faulkner Chapel, Saluda.

"I have fought the good fight, I have finished the race, I have kept the faith."
Read Less

Print
A celebration of Jim's life is planned for a later date.

Posted Feb 26, 2019 at 01:25pm
Oh daddy I love you so. You've shown me happiness, you put food on the table. Kept me warm when I was cold. You taught me right from wrong. And for this I thank you from the bottom of my heart. Oh daddy how I love you so. Please know if I could take your pain away I would. But I know you will be in the arm's of an angel. And they will take care of you. I miss you so much daddy. Kimberly your daughter
Comment Share
Share via:
D

Posted Feb 22, 2019 at 03:49pm
Please accept my heartfelt condolences. May our family find peace and comfort at this most difficult time. Sending love and prayers to Aunt Sue, Kimberly, Francis, Tommy and Shirley and my father Johnnie.
Comment Share
Share via:
K

Posted Feb 22, 2019 at 12:25pm
I'm his oldest daughter Kimberly. I remember every weekend when I was just a little girl, we would always go to the boat. He loved the water fishing. But most of all he adored my mother Sue. Oh daddy how I love you so. I will always remember you.
Comment Share
Share via:
S

Posted Feb 18, 2019 at 08:01pm
Your sister will cherish all the years we have had together and forever love you. Until we meet again my heart will be heavy with sorrow and rejoice that you live with our lord Jesus Christ. Love you Jim, Rest in peace. Shirl

Posted Feb 18, 2019 at 03:19pm
Live on in eternity with Christ Jim. Brenda and I are blessed to have known you. J C and Brenda
Comment Share
Share via: 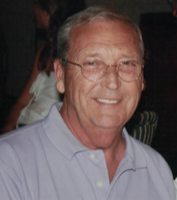