To share your memory on the wall of James Watts, sign in using one of the following options:

As a young man, Winston attended St. Albans School in Washington DC and graduated from Woodberry Forest School. In 1958, he entered Virginia Military Institute, where he specialized in rebelling against authority. He would go on to graduate from the University of Hartford, where he met the love of his life, Helene. He married his sweet bride at her parents’ home in Rocky Hill, Connecticut on June 12, 1965. Winston had an outgoing personality that made him a natural salesman, and for decades he enjoyed traveling for work and chewing the fat with his regulars. He worked for Hoffman-La Roche AG, General Medical and Wilcox Bait and Tackle of Newport News, Virginia.

Winston had a penchant for fast boats and decrepit cars. His childhood summers were spent on the water, navigating the marshes of the Chesapeake around Annapolis, and Winston never lost his boyhood love for saltwater fishing and power-boat cruising. He always felt the most comfortable with the sun on his back and wind in his face. A natural ecologist, he recognized that everything in the Bay was vitally interconnected and deserved to be protected. As a parent, he taught his children how to fish, work a gillnet and have fun getting dirty. As part of his legacy, he now leaves two adult scientists who have devoted their careers to protecting aquatic resources for future generations.

When it came to pets and kids, Winston always led with his heart. It was rare for a day to go by, after a beloved pet’s passing, before Dad would roll home with a new puppy – much to our delight and Mom’s amused acceptance. Winston and Helene’s family and social lives revolved around boating, fishing, gourmet cooking and passing countless hours on their pier picking crabs plucked from Greenmansion Cove. Winston never sought out the social limelight but rather preferred to pull a friend aside for a leisurely, good-natured chat. Anyone singled out for his attention will warmly recall his intellect, humor and generosity of spirit.

Among his many hobbies, he perhaps best loved pulling stranded sailboats off of local sandbars and mudflats. His best friend, Jan Oxley, was the most frequent recipient of his services. He was a no-nonsense captain but always had takers among his friends for an early-morning run to pick the nets and enjoy a quiet sunrise together. Winston was born by the Bay, lived alongside it and died next to it… a waterman to the end.

He will be missed by us all. In lieu of flowers the family requests donations be made to a charity of your choice supporting the Chesapeake Bay.

A Memorial Service will be held at 11 am Monday, June 17 at Faulkner Funeral Homes, Foster-Faulkner Chapel, Mathews, VA. Information will be made available at www.faulknerfuneralhcs.com.
Read Less 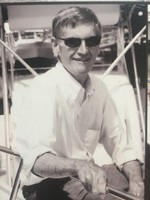