To share your memory on the wall of Lawrence Hardwicke, sign in using one of the following options:

The family will receive friends on Wednesday, April 17th from 6 to 8 pm at Faulkner Funeral Homes, Bristow-Faulkner Chapel in Saluda. A funeral service will be on Thursday, April 18th at 11 am in Bluff Point United Methodist Church at 2551 Bluff Point Road in Kilmarnock, VA. Interment will follow in White Marsh Cemetery, Lancaster.
Read Less

Receive notifications about information and event scheduling for Lawrence

We encourage you to share your most beloved memories of Lawrence here, so that the family and other loved ones can always see it. You can upload cherished photographs, or share your favorite stories, and can even comment on those shared by others.

We hold the Hardwicke Family in our thoughts and prayers.

Larry and I conversed on email quite a bit and passed a lot of jokes and political views. But the best memory we had was the haunted house we did while at VR-52 at Selfridge ANG Base. 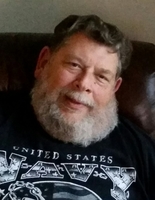