To share your memory on the wall of Lorraine Kahan, sign in using one of the following options:

After moving to California they had two children, which survive her, Mark Andreasen, and Victoria Andresen Grey. The family moved to Connecticut in 1967, where Lorraine became employed as a secretary and office manager at Kahan, Steiger, and Associates, a CPA firm.

Lorraine and Robert Kahan, now deceased, were married in 1981 and resided happily in Stamford, Connecticut for many years. After retirement they moved to Lancaster, Virginia where they enjoyed gardening, boating on the rivers around the Chesapeake, and traveling the world. She moved back to California in 2013, where she enjoyed socializing and cultural outings with old and new friends in Brentwood, as well as nearby family.

A graveside service will be held at 11:30am Saturday August 3, at Zoar Baptist Church Cemetery, Ball Park Road, Deltaville. Immediately afterwards all are invited to join the family in celebration of her life at The Tides Inn, King Carter Dr., Irvington.

In lieu of flowers the family suggests a contribution to the ASPCA in her memory, a cause dear to her. Bristow-Faulkner Funeral Homes, Saluda, is assisting the family with arrangements.
Read Less

Receive notifications about information and event scheduling for Lorraine

We encourage you to share your most beloved memories of Lorraine here, so that the family and other loved ones can always see it. You can upload cherished photographs, or share your favorite stories, and can even comment on those shared by others. 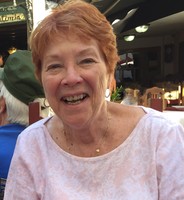