To share your memory on the wall of Major General Sampson Bass, sign in using one of the following options:

MG Bass was born on April 10, 1929 in Washington, D.C. to Martha L. Bass (nee Mezick) and Sampson H. Bass, Sr. He graduated from Anacostia High School and attended the Virginia Military Institute where he graduated in 1951 with a degree in Chemistry. He earned a Master's Degree in Business Administration with Distinction from Harvard University in 1957, and attended the US Army Chemical School, the Command and General Staff College, and the Army War College.

MG Bass served in the Infantry during the Korean War and in Japan prior to transferring to the Chemical Corps in 1954. His duty assignments included the Office of the Chief Chemical Officer at the Pentagon, Washington, D.C., Operations Planner, Headquarters, US Army Pacific, Hawaii, and Program Manager, Picatinny Arsenal, N.J. He was a veteran of the Vietnam War.

He served in various assignments at the Army Chemical Center, Md. including Deputy Commander of Edgewood Arsenal and became the Director of Weapons Development and Engineering Laboratories where he was involved with the US Army Chemical Stockpile Disposal Program in 1969. MG Bass has been referred to as a world authority on chemical weapons destruction and is considered the “Grandfather” of the Chemical Demilitarization Program that started with Task Force Eagle. As a result of the foundation laid by MG Bass, the US Army Chemical Materials Agency was able to complete its mission of destroying stockpiled chemical agents and munitions.

Assigned to the Pentagon as Director, Supply and Maintenance for the US Army, he retired in 1981 and accepted a position with Ethyl Corporation, Richmond, Va., as Corporate Vice President, retiring in 1996.

A man of faith, MG Bass preferred the “good ole hymns.” He held particular interest in art and memorabilia from his many travels and enjoyed Civil War history and writings on General George Marshall. He was an avid golfer and a gardener. In younger years, he played the guitar and sang with his children. He loved a quiet game of Solitaire.

In lieu of flowers, memorial donations may be made to Middlesex County Volunteer Rescue Squad, Deltaville, Va., the VMI Foundation, Inc., Lexington, Va., and the USSOCOM Warrior Care Program.

We encourage you to share your most beloved memories of Major General Sampson here, so that the family and other loved ones can always see it. You can upload cherished photographs, or share your favorite stories, and can even comment on those shared by others. 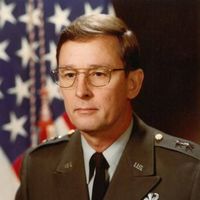