To share your memory on the wall of Pearl Kennard, sign in using one of the following options:

Print
Pearl Renell Kennard, 93, of Deltaville, passed away peacefully on January 1, 2021 after a long stay in a nursing home under hospice care. She was born June 1, 1927 in Middlesex County, daughter of the late Otis and Nancy Callis.

Renell... Read More
Pearl Renell Kennard, 93, of Deltaville, passed away peacefully on January 1, 2021 after a long stay in a nursing home under hospice care. She was born June 1, 1927 in Middlesex County, daughter of the late Otis and Nancy Callis.

Renell along side her husband, Harold owned and operated Kennards Crab Bar in Deltaville for many years. She was a loving and caring mother, grandmother and great grandmother.

Receive notifications about information and event scheduling for Pearl

We encourage you to share your most beloved memories of Pearl here, so that the family and other loved ones can always see it. You can upload cherished photographs, or share your favorite stories, and can even comment on those shared by others.

Plant a Tree in Memory of Pearl
Plant a tree 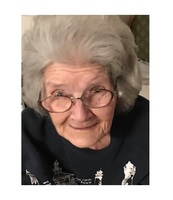