To share your memory on the wall of Selena Gray, sign in using one of the following options:

In lieu of flowers, donations may be made to the Mathews Volunteer Rescue Squad, PO Box 723, Mathews, VA 23109.
Read Less

Donations are being accepted for: MATHEWS VOLUNTEER RESCUE SQUAD INCORPORATED.

We encourage you to share your most beloved memories of Selena here, so that the family and other loved ones can always see it. You can upload cherished photographs, or share your favorite stories, and can even comment on those shared by others.

Posted Dec 27, 2019 at 07:19pm
A wonderful matriarch of your family. My condolences and I am sure the memories of her life will bring you many joyful reflections in the future.
Rev. Charles Cheek
Hampton, Virgjnia
Comment Share
Share via: 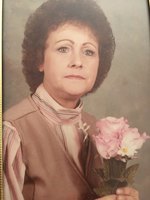