To share your memory on the wall of Sue Myers, sign in using one of the following options:

After marrying George A. Myers, Jr. in 1959, she moved with her family to Danville, VA where she resided for 49 years. She was active in Mt. Vernon UMC serving faithfully and joyfully in the Chancel Choir the entire time. She was a member of the Grove Park Garden Club, the Wednesday Club, and a volunteer at Danville Memorial Hospital for many years. She also enjoyed playing Bridge and her annual vacation at Myrtle Beach with her friends for many years. She also had a passion for ACC Basketball and never missed a University of North Carolina or Duke University basketball game or following March Madness through the Final Four.

In 2008, she moved to Hartfield, VA to be near her daughter and son-in-law who faithfully remained her caretakers until her death. She joined Clarksbury United Methodist Church in Hardyville, VA and was active in the church choir there for many years.

Sue was predeceased by her mother and father; her husband, George A. Myers Jr.; her sister, Betty Boaz Smith; her brother, Raymond Jefferson Boaz Sr.; and her son-in-law, Nevin Ramsburg. She was a wonderful mother and loved her children, grandchildren and great-grandchildren with all of her heart. She is survived by her daughter, Suzanne Swanson Ramsburg of Deltaville, VA; her son and daughter-in-law, Kent (Kenny) and Donna Swanson of Nashua, NH; her grandchildren, Anne Munson (Noel) of Tallahassee, FL, Meredith Walker (David) of Acworth, GA, Tracy Offutt (Martha) of Oceanside, CA, Matthew LaCoe (Erica) of Waynesville, MO, Cortney Bean (Nicholas) of Nashua, NH, and Meagan Swanson (George Clements) of Nashua, NH. In addition, she is survived by 14 great-grandchildren. She is also survived by her special and dear friends, Linda and Henry Maxey of Chatham, VA and Suzanne Fisher of Danville, VA.

The family wishes to extend their appreciation to the entire staff at Rappahannock Westminster Canterbury in Irvington, VA, with special thanks to the caregivers of the Enhanced Assisted Living area for the loving care and support given to our mother during her last four years of life. They made every day a special day for her and extended their love to her and our family. Mother was indeed blessed.

In lieu of flowers, the family requests donations be made to the Clarksbury United Methodist Church, P.O. Box 10, Hardyville, VA 23070 or the RWC Employee Christmas Fund, 132 Lancaster Dr., Irvington, VA 22480.

Burial will be private with a Celebration of Life to be held at a later date. Arrangements by Faulkner Funeral Homes, Bristow-Faulkner Chapel, Saluda.
Read Less

Receive notifications about information and event scheduling for Sue

We encourage you to share your most beloved memories of Sue here, so that the family and other loved ones can always see it. You can upload cherished photographs, or share your favorite stories, and can even comment on those shared by others.

Posted May 15, 2020 at 10:12am
My grandma was loving, caring, and so very special. She laughed, prayed, and cried with us. I remember laughing hysterically with her until we couldn't remember what triggered it. I remember Easters at her house, and sneaking out early morning to find the Easter baskets. I remember the meals we had in her little kitchen (while she peeked out the window down the driveway) and in her beautiful dining room: chicken salad, beef vegetable soup, roast beef with potatoes, green beans, gravy and hot rolls - and always fresh sliced cucumbers and tomatoes. I remember the snacks and desserts: fritos with french onion dip, Fudge Sticks, ice cream bars, Pringles. I can close my eyes and see every bit of her house and yard. I remember her neighbors and her church in Danville. I remember canasta games with my mother, sister, grandma and Emy. I am so glad she can sing again the way she used to, that she can smile, laugh, and even dance! I love you and miss you Grandma Sue... thank you for being my Grandma!
Comment Share
Share via: 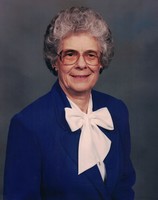