To share your memory on the wall of Thomas Hogge, sign in using one of the following options:

Print
Thomas Clifton Hogge, 76, of Chesterfield, Va, passed away Saturday, March 16, 2019. He was preceded in death by his parents, Wessie and Milford Price.

He is survived by his wife, Joyce Gibson Hogge, son, Timothy F. Hogge, daughter, ... Read More
Thomas Clifton Hogge, 76, of Chesterfield, Va, passed away Saturday, March 16, 2019. He was preceded in death by his parents, Wessie and Milford Price.

We encourage you to share your most beloved memories of Thomas here, so that the family and other loved ones can always see it. You can upload cherished photographs, or share your favorite stories, and can even comment on those shared by others.

Love, Kat, Danielle, and Izzy sent flowers to the family of Thomas Clifton Hogge.
Show you care by sending flowers

Flowers were purchased for the family of Thomas Hogge. Send Flowers

Posted Mar 20, 2019 at 12:10am
Papaw was an amazing man essentially perfect in my eyes and always filled with love, support and care. Our Sunday outings filled with laughter and play. Our morning coffee was filled with loving company and peace. He was and still will be one of the most important people in my life. He always had nicknames for everyone. I would always be known as his Heinz 57 or squirt. He always would call Grandma Shuggy (dont know how to spell it). As soon as I came from Puerto Rico I was showered with unconditional love. He was so confident in me that he sat me in his lap and let me drive his white GMC truck which now that I look back on might not have been the best idea. Our Sunday morning began with coffee then a trip to the dump. Doesn't sound exciting at first but let me tell you, we would spend a great deal of time in the toy section at Walmart. When I was indecisive on which toy to select, he was patient and comforting. As I got older I saw the love in his eyes and how much he cared for everyone. I am truly grateful for every moment I was blessed to experience. I am grateful that he was able to see me marry and that he was able to meet his Great Granddaughter. All my love forever and always. 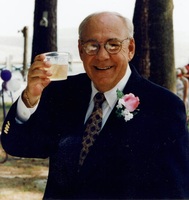