To share your memory on the wall of Willard Wake, sign in using one of the following options:

Provide comfort for the family of Willard Wake with a meaningful gesture of sympathy.

Chappy began his career in the petroleum business in 1974 at Thrift Oil Company where he worked for 45 years alongside his wife and father-in-law. He graduated from North Carolina Wesleyan College in 1972 where he was inducted into the Athletic Hall of Fame in 2003. He was a gifted athlete and fierce competitor in basketball, tennis and golf. All of his life, Chappy was a die-hard Tar Heel fan! He lived by the philosophy of UCLA Coach John Wooden and his faith in God.

The family extends their sincere appreciation to Dr. and Mrs. Ronald Haggerty and the staff of Riverside Walter Reed Hospice.

Receive notifications about information and event scheduling for Willard

We encourage you to share your most beloved memories of Willard here, so that the family and other loved ones can always see it. You can upload cherished photographs, or share your favorite stories, and can even comment on those shared by others.

Flint Hills Resources sent flowers to the family of Willard B. "Chappy" Wake Jr..
Show you care by sending flowers

Posted Jan 06, 2020 at 02:29pm
Pat,
We wish to express our sorrow for the loss of Chappy. It has been many years since we shared good times with Chappy, you, Earl & Helen Green & Larry & Betty at the Virginia Petroleum Jobbers' conventions. We have the fondest memories of Chappy, you & your mother & father at those events. Sincerely, Earle & Meredith Spruill in Roanoke.
Comment Share
Share via:

Posted Jan 04, 2020 at 01:10pm
I am so sorry for your loss. Chappy and I were pretty good friends. I know what you all are going through because I just lost my wife to that dreaded disease on Nov 6 . praying for the family
Marty Melville Urbanna Va.
Comment Share
Share via: 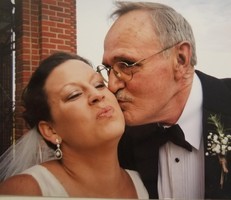