To share your memory on the wall of William "Bill" Ball Sr., sign in using one of the following options:

Provide comfort for the family of William "Bill" Ball Sr. with a meaningful gesture of sympathy.

Print
William “Bill” Jennings Ball, Sr. passed away peacefully in his home on September 23, 2019. Bill was born in 1924 at his family home, Salvia, in King & Queen County to Lucy and John Henry Ball.

He is preceded in death by his wife, Ca... Read More
William “Bill” Jennings Ball, Sr. passed away peacefully in his home on September 23, 2019. Bill was born in 1924 at his family home, Salvia, in King & Queen County to Lucy and John Henry Ball.

Bill graduated from Marriott High School in St. Stephens Church, Va., and attended Virginia Tech before joining the Merchant Marines. He was a 65-year member of the Arlington Masonic Lodge #102 and a member of the Liberty Bell Shrine Club. After leaving the Lumber business, Bill formed Ball Realty Company in Tappahannock, VA, and was an active real estate broker and appraiser for over 4 decades. He was an avid fisherman who was happiest whenever he was on the water. He registered for his pilot’s license when he was 60 years old and enjoyed flying with his family and friends. Bill was a long-time member of Beale Memorial Baptist Church and served as a Deacon for several years.

We encourage you to share your most beloved memories of William "Bill" here, so that the family and other loved ones can always see it. You can upload cherished photographs, or share your favorite stories, and can even comment on those shared by others.

- Kayla and Crystal- sent flowers to the family of William "Bill" Jennings Ball Sr..
Show you care by sending flowers 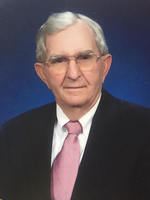