To share your memory on the wall of William Meredith, sign in using one of the following options:

Provide comfort for the family of William Meredith with a meaningful gesture of sympathy.

A graduate of the Staunton Military Academy and the University of Virginia, at the request of his beloved friend, James C. Wheat, Bill joined Wheat & Co in 1954 in their Norfolk office. In 1957, after proving his merit, Bill was asked to build the Roanoke office, which he did for 10 years. Once again, Jim Wheat asked him to move to Raleigh to launch the firm’s footprint into NC. After opening and recruiting experienced advisors for 7 offices in NC in 6 years, Wheat brought him to Richmond to run the firm’s branch system. Bill was instrumental in the merger between Wheat & Co. and Winston-Salem based, First Securities, Inc. As a loyal and trusted EVP and board member for the firm, his 43 years serving in many roles, including Head of the Branch System, Head of the NC offices, Director of Marketing and Advertising and part of the team that launched First Clearing. His recruiting skills brought many successful producers to the firm throughout his career. With his genuine and engaging personality, he had a unique gift for connecting with people. We’ve heard many stories from those whose lives he touched. Not only from financial advisors that he helped bring to Wheat, but other employees and clients have shared their experience and gratitude about what he meant to them.

Bill grew up in Lawrenceville, Virginia and became an Eagle Scout in 1944. He graduated early from the Staunton Military Academy in January 1945 in order to hasten his entrance into military service. Bill attended the Virginia Military Institute for one semester of post-graduate military training until May of 1945 when he reached the age of 18. He immediately enlisted in the U.S. Army and was posted to Fort Keesler, Mississippi for Army Air Corp training. In December 1945, he was posted to Nuremburg, Germany, serving as an Army Air Corp mechanic and pilot candidate until December 1946, when he was honorably discharged from the US Army Air Corps. He returned state side to attend the University of Virginia, earning a BS in Geology in 1951. At UVA, Bill was a member of the Z Society and Delta Psi (St. Anthony Hall) fraternity, where he counted many of the greatest generation as his lifelong friends.

Bill married Eugenie deGrasse Pieper 1951. They were married 54 years until her passing in 2005.

Pursuing his boyhood dream of flying, at the age of 38 he earned his pilot’s license. He loved flying a single engine Cessna 150, except that his late wife and mother of his four children did not share that glee. Hence, that hobby ended abruptly.

Bill was a lifelong devoted bird hunter and nature lover. Growing up near the family farm in Lawrenceville, he was an avid quail, woodcock and turkey hunter. This led to his love for grouse and duck hunting throughout his life with many dear and devoted friends. He had a special love of the mountains, hunting frequently in Bath and Highland County. Bill was a member of the Swan Island Club in Currituck Sound, VA and the Cohoke Club on the Pamunkey River.

Bill loved his years in Roanoke, serving as a Scoutmaster and coaching youth football. He was an accomplished tennis player and golfer, shooting his age at 77, repeating that feat countless times until he reached the age of 90. His hobbies included completely restoring a 1942 Jeep from the family farm in Lawrenceville, propagating English boxwood, growing shitake mushrooms, and building his own smoke house to cure Smithfield Hams. He spent much of his retirement hunting, fishing and creating unique crafts centered around wildlife. Bill created meticulous life-like carvings of wild game birds and also made custom hunting knives. In the past two years he enjoyed creating unique walking canes that he gave away to friends and acquaintances. Most of his primary materials were found during his frequent hikes in Essex County.

He was a member of The Country Club of VA, where he enjoyed many years of golf and dinners as a member of The Captain’s. He was a former member and served on the vestry of St. James Church and served on the vestry both the Sons of the Revolution and the Sons of the Confederacy. He led an exemplary life dedicated to serving family, associates and friends with high principles of integrity and honesty.

Posted Jan 13, 2020 at 07:37pm
Dear Paige, Bill's life was a life well-lived. As you experience the sadness of his passing, remember too the beautiful love and life you shared.

Flowers were purchased and a memorial tree planted for the family of William Meredith. Send Flowers 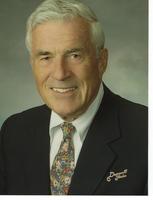