To share your memory on the wall of Herman \"Bill\" Hodges, sign in using one of the following options:

“Bill” was the son of the late Captain Jesse Raymond Hodges and Margaret Ethel Hodges of Mathews. He was of Baptist faith and a true family man. He came from a long line of Sea Captains and joined the Merchant Marines at the age of 16 during WWII. He then went on to serve in the United States Army during the Korean Conflict and Vietnam war before becoming a civil servant at the Yorktown Naval Weapons Station.

He was an avid artist, poet, and cartoonist. Much of his artwork and poems were influenced by his love for the water and outdoors which was passed on to his grandchildren. He was a contributor to the book, The Mathews Men, which depicted his family’s history and their courageous service during WWII.

Those that knew Bill would enjoy his wonderful since of humor, the stories that he would tell, reciting poetry, playing of the harmonica and being a sharp dresser. Rarely would he venture out without a coat and tie on unless he was working around his Mathews farm house. His tie collection was only matched by his collection of books. Bill would often start his day off by singing, dancing and enjoying his music. He had a great love of life and never met a stranger. The angels will rejoice in his joining their throng.

Receive notifications about information and event scheduling for Herman "Bill"

We encourage you to share your most beloved memories of Herman "Bill" here, so that the family and other loved ones can always see it. You can upload cherished photographs, or share your favorite stories, and can even comment on those shared by others.

Posted Apr 11, 2019 at 05:25pm
Please accept our most heartfelt sympathies for your loss. Our thoughts and prayers are with you during this difficult time. 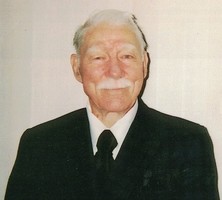