To share your memory on the wall of Lt. Col. H. Lee Holloway, sign in using one of the following options:

Provide comfort for the family by sending flowers or planting a tree in memory of Lt. Col. H. Lee Holloway

Provide comfort for the family by sending flowers or planting a tree in memory of Lt. Col. H. Lee Holloway

His 24 year Marine Corps career included assignments to HML-167, HML-367, COMNAVAIRLANT, MAG-26, COMNAVAIRSYSCOM, MALS-26 and the Defense Supply Center Richmond. He commanded MALS-26. He was a graduate of the U.S.A.F. Command and Staff College and the U.S. Army War College. While attending the War College he was the Editor of the 1993 Torch, the U. S. Army War College yearbook.

He is survived by his wife, Elizabeth F. Holloway, 450 Steamboat Lane, Hartfield, Virginia; two sons, Harry Lee Holloway IV and Ben Lever Holloway, as well as, Thomas Benjamin Worthy & his wife Shelia, and a daughter, Amy Worthy-Foss & her husband Bill Foss. He is also survived by his mother, Juanita Yow Holloway of Milton, WA and his brothers, Ralph Johnson Holloway & wife Pam of Auburn, WA, and David Bryan Holloway & his wife Wendy of Snoqualmie, WA. He was preceded in death by his father Dr. Harry Lee Holloway, Jr., and his sister Margaret Ellen Betting.

His was a life engulfed with the joy of living it to the fullest, led by a love for his family, friends & country. His passion for the Constitution formed his thoughts on leadership of this great country. Wisdom, integrity, honesty & joy were hallmarks of his character. He will be sorely missed.

Memorial service will be held at 10:30am on Tuesday, June 15, 2021 in Urbanna Baptist Church. Arrangements by Faulkner Funeral Homes, Bristow-Faulkner Chapel, Saluda, VA.

Donations are being accepted for: MARINE CORPS HERITAGE FOUNDATION.

We encourage you to share your most beloved memories of Lt. Col. H. Lee here, so that the family and other loved ones can always see it. You can upload cherished photographs, or share your favorite stories, and can even comment on those shared by others.

Posted Jun 12, 2021 at 03:29pm
Dear Becky and Family;
Sue and I are so saddened to hear of Lee’s passing. Our thoughts and prayers are with you.
I first met Lee in 1979 while we both were attending the Amphibious Warfare School, Quantico, VA. His sense of humor set the tone for our on-base neighborhood and fellow classmates. Our careers crossed paths several times to include COMNAVAIRSYSCOM and the Defense Logistics Agency (DLA). After I retired from the Marine Corps in 2000 I had the pleasure of working with Lee at Sierra Management. More importantly, over the years we had some great discussions concerning our shared interests in logistics and U.S. history. He was one of the best! Lee will be missed.
Sincerely,
Mike and Sue Kennedy

Posted Jun 10, 2021 at 05:33pm
What a true Officer and a Gentleman and a true Marine Corps Officer to the Corp! I worked with Lee at DGSC Richmond as a Naval Officer and then later at Sierra Technology, when Lee hired me as a contractor. That smile, his wit, and laugh, and his honesty and straight-forward opinions were his haul-mark. I’ll miss you Lee (COL). V/r, Rich Bradshaw, USN Supply Corps, (RET). Midlothian , Virginia.
Comment Share
Share via: 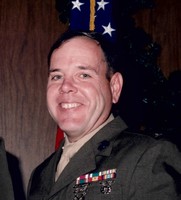